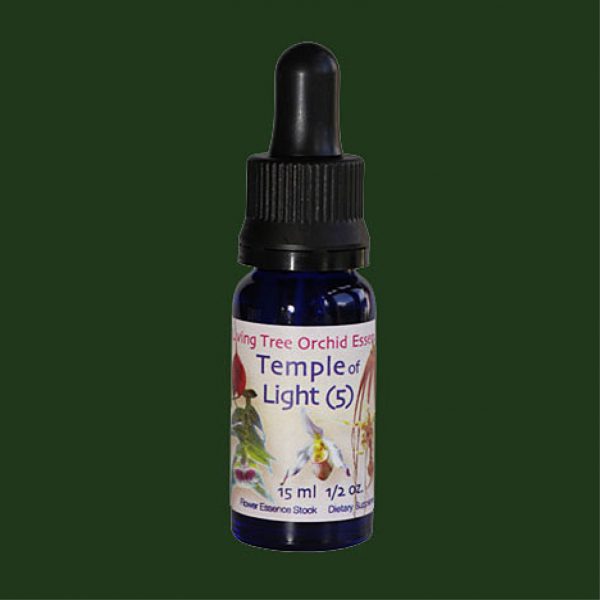 Created to meet the challenge of the energetic instability of prolonged use of Temple of Light.

Temple of Light (5) was created to meet the challenge of the energetic instability of prolonged use of Temple of Light in that there are certain clients who are unable to allow the connections of the soul to the incongruity between The Bai-Hui point and the inner chamber of the heart, and the seventh chakra and the fourth chakra as well.

Most authorities believe that there is no real healing when these four points are out of synchronisation or not connected. There are various ways that these points could be connected but nothing that acts quickly or permanently. What I have also found is that there is a latent disconnection between the orb of consciousness (the 8th chakra) and the brow and sacral chakras. To assist a rapid resolution of this problem, this essence was called into being. The essence is also available as a spray in which the essence of Gold has also been included along with Rose Otto essence to act as a space clearing enhancer.

The activity of the essence is as follows: The first and dominant force starts at the brow or Ajna chakra draws around the head and upwards to pull on and thus open the Bai-Hui and continues on a vertical route to the higher chakras. This is the joint effort of Core of Being, which is a powerful activator, and Pushing Back the Night, which tells the causal body that there is no darkness left around to fear. Renewing Life’s joint influence on the root and 12th chakras create a grounding of the spirit, which again invites the Inner Chamber to open. This is so unusual in that the Inner Chamber is often the way to reconnect to the Divine. But in the case of those traditions which have abandoned the inner feminine, the Wisdom of the Soul or the Shahina, a “reverse order” i.e. goes to the outer limits of the Spiritual Reality and from that depth and intensity provides the protection and the space for the delicate inner temple to be built. This essence then indirectly calls on the inner chamber to position itself as that inner temple now that all the negative energies have been evicted from the immediate vicinity. So this remedy would seem to invite the feminine to accept and then later challenge those big belief systems where God living exclusively outside of the temple of the body and is always just out of reach of the inner chamber, Shahina or the Chalice of the Spirit. With the inclusion of the Protective Presence the matrix of the causal body is moved to feed the chakras creating an inner strength to accept the inner being. Releasing Karmic patterns fixes the 8th chakra into proximity with the 7th chakra to allow continued inspiration to the 7th chakra of the divine consciousness.